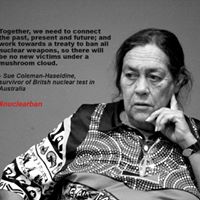 Sue Coleman-Haseldine has been at the forefront of the camapign to abolish nuclear weapons. As a survivor of British nuclear testing at Maralinga and Emu Fields, Sue has supported ICANi‘s campaign by speaking out and sharing her testamony with people from around the world. Sue joined ICANi campaigners from around the world to witness, and celebrate ICANi being awarded the Nobel Peace Prize for 2017. Click here to watch her message from Oslo.

Sue  has spoken to over 150 governments at the Third Conference on the Humanitarian Impact of Nuclear Weapons in Vienna on 8–9 December 2014. A Kokatha-Mula woman, Sue was about three years old when the British nuclear weapons tests took place at Maralinga in the remote West of South Australia.

Sue Coleman-Haseldine has told delegations from over 150 governments that the British and Australian governments chose to conduct the tests at Maralinga and Emu Fields because they didn’t believe that the land was valuable.

“There are lots of different Aboriginal groups in Australia. For all of us our land is the basis of our culture. It is our supermarket for our food, our pharmacy for our medicine, our school and our church” Sue told delegates.

“These tests contaminated a huge area and everything in it but people hundreds of kilometers away were also impacted… I noticed people dying of cancer, something that was new to us,” Coleman-Haseldine told the conference.