eight years on: Learning from the fukushima nuclear disaster

Remarks at the launch of Japanese edition of “Learning From Fukushima”, International House of Japan, Roppongi Tokyo, 20 May 2019

I am delighted to be with you today for the launch of the Japanese edition of Learning from Fukushima. I am deeply grateful to Pete van Ness and Mel Gurtov for creating this valuable book and Norifumi Namatame for his dedication in bringing the Japanese edition to fruition. I’m honoured to be in the company of Tatsujiro Suzuki and Kiyoshi Kurokawa. The report of the Fukushima Nuclear Accident Independent Investigation Commission (NAIIC) which Kurokawa-sensei chaired is an extraordinary, landmark work. In my view, it stands as a beacon of integrity and leadership and provides the most authoritative roadmap for learning from Fukushima. That its recommendations remain largely unimplemented exacerbates our peril.

On 6 April 2011, Yvonne Margarula, the senior traditional custodian of the Mirrar people, whose land includes the Ranger uranium mine, wrote to UN Secretary-General Ban Ki-Moon:

“We Aboriginal people opposed Ranger’s development and even though our opposition was overruled it has never gone away. ... the radiation problems at Fukushima are, at least in part, fuelled by uranium derived from our traditional lands. This makes us feel very sad.”

In October 2011, in parliamentary testimony, the Director-General of Australia’s Safeguards and Non-Proliferation Office confirmed that Australian uranium was in most if not all of the Fukushima Daiichi reactors at the time of the meltdowns and explosions.

The stuff that puts the “nuclear” in nuclear weapons and nuclear reactors begins with the mining of uranium. We are all connected by and vulnerable to this deathly trade, which traverses the globe, and takes this raw material to places and times beyond control, just as surely as resulting radiation spreads worldwide with the wind and rain, with no regard for borders. It is fitting that this book originates in Australia.

That nuclear power was deployed widely in Japan is no coincidence, as historian Peter Kuznick has documented.

US Atomic Energy Commissioner Murray stated in the early 1950s: “Now, while the memory of Hiroshima and Nagasaki remain so vivid, construction of such a power plant in a country like Japan would be a dramatic and Christian gesture which could lift all of us far above recollection of the carnage of those cities.”

AEC Chairman Lewis Strauss wanted to “highlight the peaceful applications of nuclear explosive devices and thereby create a climate of world opinion that is more favourable to weapons development and tests.”

The Washington Post editorialised: “Many Americans are now aware … that the dropping of the atomic bombs on Japan was not necessary. … How better to make a contribution to amends than by offering Japan the means for the peaceful utilisation of atomic energy. How better, indeed, to dispel the impression in Asia that the United States regards Orientals merely as nuclear cannon fodder!”

Eight years into the world’s most complex nuclear disaster, the damaged Fukushima Daiichi nuclear power plants and spent fuel ponds are still leaking and dangerous, prospects for removal of the reactor fuel melted through containments are remote, vast amounts of contaminated water continue to leak and accumulate, 8000 odd clean-up workers labour daily and will need to for many decades, the needs of people exposed to radioactivity and those displaced are still neglected, no one is in prison for a disaster fundamentally caused by the negligence of the operator and the government, and most of the lessons of Fukushima have yet to be heeded.

Who knows what another large earthquake and tsunami could unleash. One can have little confidence, should things go wrong again in Fukushima or other plants, especially those that have been re-started, that crisis management would be much better than unfolded in Fukushima 8 years ago.

Important data on population radiation exposures emerged earlier this year from external gamma exposure measurements from glass badge individual monitors carried between 2012-5 by residents of Date City. Almost 53,000 people, 81% of the population, received and returned glass badges every 3 months for a year. Date is more than 50 km from the Fukushima Daiichi plant. It is not one of the most contaminated municipalities. Allowing for a 3-fold underestimate of estimated lifetime doses in the published paper, acknowledged by the senior author, the estimated lifetime average additional doses for residents in Date range from 33 to 54 mSv, while the 99th centile doses range from 60 to 105 mSv. These are significant doses based on actual measurements, and are much greater than those generally estimated. In these data, decontamination activities did not seem to reduce people’s exposure.

In my chapter, I’ve tried to bring together the science and politics of radiation and health. I know of no other health field mired in as much manipulation, misinformation and interference by vested interests. These formidable vested interests promoting nuclear weapons and reactors include governments, bureaucracies, large corporations and captive institutions. Their tentacles extend deep into places that should be independent, like regulatory bodies and universities.

The government’s response to the nuclear disaster has been seriously deficient from the beginning. As the Commission report makes plain, the Japanese government has not acted to first protect public health and safety. It did not effectively evacuate people from harm’s way; provide stable iodine; inform and involve people; provide care and compensation to all whose right these are, inside and outside Fukushima prefecture; establish adequate long-term health surveillance; or respect and support people’s choices about leaving and re-building their lives and livelihoods. It has not phased out the most hazardous possible way to boil water to make electricity, despite the prompt shutdown of all nuclear power plants in Japan after the disaster proving that the country could manage well without them.

“I was dismayed to learn that the Ministry of Education, Culture, Sports, Science and Technology earlier this week increased the allowable dose of ionising radiation for children in Fukushima Prefecture. … As a parent, as a physician, the decision to allow the children of Fukushima to be exposed to such injurious levels of radiation is an unacceptable abrogation of the responsibility of care and custodianship for our children and future generations.”

Young children are at least 4 times more sensitive to long-term cancer from radiation as 40 year olds.

The government continues to promote the scientifically fraudulent position that less than 100 mSv of radiation is not associated with proven health risk. On the contrary, current evidence establishes that even 1 extra mSv of radiation is harmful. The more we know about radiation health impacts, the worse it looks.

More than 8 years after the disaster, the government continues to apply an allowable radiation annual dose limit for the population of 20 mSv.  It is the only government in the world willing to accept such a high level for its citizens so many years after a nuclear disaster.  I understand it has even established 4 reconstruction sites in areas where residents would accumulate more than 50 mSv/y, and scheduled returns to these areas by 2023.

Important work summarised in this book by Tim Mousseau and Anders Møller examines the effects on other species of the contamination surrounding Chernobyl and Fukushima. They and others have documented effects at every biological level, including increased genetic mutations; adverse developmental effects, including albinism, asymmetry, reduced brain size, cataracts, reduced fertility and sperm health and number; increased tumours; behavioural abnormalities such as in bird calls; reduced abundance and biodiversity. Harmful biological effects in direct proportion to the degree of radioactive contamination, without threshold, occur in virtually every species and ecological community studied - soil bacteria and fungi, trees, molluscs, insects, spiders, birds, and large and small mammals. Their findings indicate that populations living under the full range of natural stressors are almost 10 times more sensitive to ionising radiation than predicted by conventional laboratory-based approaches. It is implausible that humans would be somehow immune from such effects.

Last week I had the privilege to again visit people in Fukushima. Farmers Kenichi and Hanako Hasegawa returned to their farm in Iitate a year ago. It is a sad place. The two of them live in a beautiful big farmhouse where 4 generations used to live. It used to ring with their grandchildren’s laughter. Nowhere escapes the invisible infiltrating radiation, the unwelcome guest that will not leave. Fields lie empty, or grow crops that will feed no one. Endless piles of contaminated soil cover the best farming land. Expensive new community facilities are almost empty. Very few people, mostly older, have returned. Others commute. The primary school has 6 children, some brought every day by bus from Fukushima city. The radiation monitoring stations have been engineered to produce falsely low readings. Kenichi tells me “There is no future here”. His children are building their lives elsewhere.

We meet families dealing with thyroid cancer in children, disappointed with their negative experiences at Fukushima Medical University.

One positive change is the dramatically increasing number of solar panels producing renewable electricity, without risk to anyone.

The Japanese government seems hell-bent on presenting a veneer of the Fukushima disaster as being under control and in the past, in the lead-up to the 2020 Olympics.  The start of the Olympic torch relay, softball and baseball games are scheduled to take place in Fukushima, and some teams from other countries will be based there. Japan’s bid for the Olympics was accompanied by grossly misleading claims regarding Fukushima by Prime Minister Abe in 2013, and, it seems, possible bribes to African governments, for which Japanese Olympic Committee Chair Takeda is facing prosecution in France.

In 2012, the UN Special Rapporteur on the Realisation of the Right to Health, Anand Grover, visited Fukushima and made recommendations in a report to the UN Human Rights Council. Like the recommendations of NAIIC, they stand as a beacon shining a light on the path that needs to be taken. They also remain largely unimplemented.

In 2017 a number of delegations made recommendations to Japan in the UN Human Rights Council:

We must learn the profound lessons of the ongoing Fukushima nuclear disaster.

If we allow the continuing dangers and needs to be swept under the carpet, we can expect more similar disasters. Rather, we should utilise the 2020 Olympics in Japan to shine a light on the impacts and needs from the disaster, and work to ensure that the lessons of Fukushima are acted upon.

I think and hope this book will help us do that. 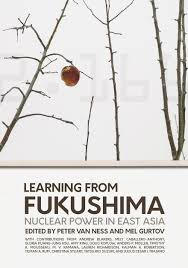