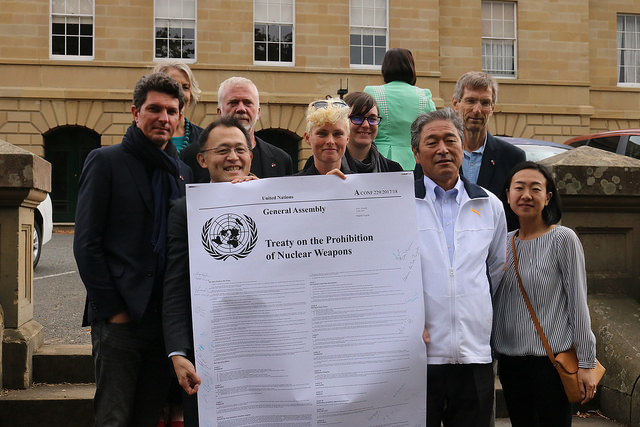 Last Friday the Peace Boat brought survivors to Hobart to describe their ordeals and ask us to help.

Tanaka, a survivor of the bombing of Hiroshima in 1945 by U.S atomic bombs, described the enormous, instant, long lasting destruction of people and land.

A farmer whose family farmed near Fukishima for several generations, described the death and destruction from the nuclear power plant meltdown after a predictable earthquake; The daughter of a survivor of the British atomic tests at Maralinga in South Australia described the long term effects on First Nation people not only from the radiation (which was blown all over Australia by unpredicted winds) but also of the arrogant assumption that their lands can be used for storage of radiation residues which the Australian cities find too dangerous.

Some of us have been predicting the dangers of nuclear weapons and power stations since 1945. Now the groundswell of people’s opinion has led to the vote in the UN Assembly to ban nuclear weapons.  Those few governments who sell armaments and stockpile nuclear weapons are in league with the arms dealers and lie to us and themselves about the horrendous damage of war, cannot accept (yet) this vote.