Australia needs to be transparent about its military exports: Australian Arms Control Coalition

A newly formed group of civil society organisations is calling on the Australian Government to immediately halt the export of arms to countries involved in the war in Yemen, and lift the shield of secrecy over the sale and export of Australian-made military assets, following a damning ABC report today.

The story provides new evidence, including photos, showing Australian made remote weapons systems being sent to the United Arab Emirates Armed Forces, and Saudi Arabia’s Ministry of Interior. Both the UAE and Saudi Arabia have been accused of extensive human rights abuses in Yemen, including the targeting of civilians, which the UN said may amount to war crimes.

“The evidence presented in the ABC story raises a whole range of questions around where Australian arms are going, what risk assessment processes are taking place and what kind of follow ups are being done to ensure these arms are not inadvertently being used to carry out human rights abuses,” said Kellie Tranter, a lawyer and member of the newly formed Australian Arms Control Coalition, which encompasses key Australian civil society organisations and advocates.

“The lack of transparency around Australia’s defence exports is extremely concerning. Australians should know who their government is sending arms to and how those arms are being used, and they should have concrete guarantees that those arms won’t be used to commit or facilitate violations of international humanitarian law (IHL) or international human rights law. Right now those concrete guarantees do not exist, and that is unacceptable.”

“It is unthinkable that Australian made defence exports could be helping fuel abuses in the war in Yemen, which has left more than 22 million people in need of life-saving humanitarian assistance, while some 85,000 children have died from the effects of war including starvation.

“The coalition is calling for increased transparency and accountability surrounding Australia’s defence exports processes, and associated risk assessments. We cannot turn a blind eye to the war in Yemen, and the role foreign weapons are playing.”

The AACC formed in April 2019 out of shared concern around the lack of accountability and transparency in Australia’s defence exports, particularly around current arms sales to parties to the devastating war in Yemen.

Its members include Amnesty International, Human Rights Watch, the Independent and Peaceful Australia Network, the Medical Association for Prevention of War, Oxfam Australia, Save the Children, SumOfUs and Wage Peace, Kellie Tranter and Susan Hutchinson.

This comes after a UK appeals court last month found the UK had unlawfully authorised exports of British weapons to Saudi Arabia for possible use in the war in Yemen. The Court held that the UK’s system for assessing the risk of defence exports leading to IHL violations in Yemen was flawed because it failed to properly assess and consider relevant evidence of Saudi Arabia’s IHL violations in Yemen.

“This significant decision, which forced the UK government to halt issuing all licenses to Saudi Arabia, raises the possibility that Australia’s system is also falling short of a suitable due diligence process,” Ms Tranter said.

For media inquiries contact Evan Schuurman from Save the Children on 0406 117 937. 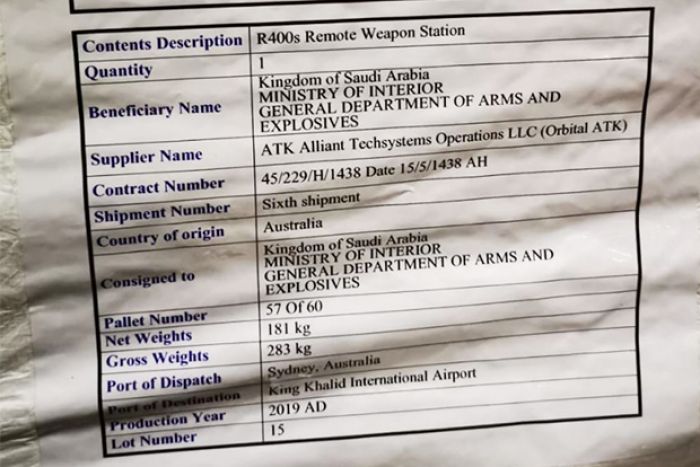 Fighting Yemen's dirty war, an Arab military is buying a weapons system made in Canberra

Catch up with MAPW's campaign on arms exports.